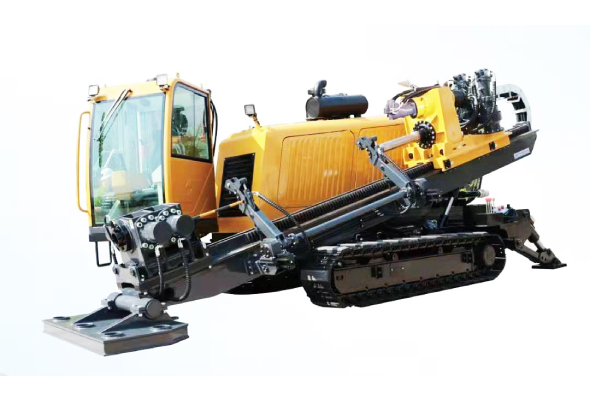 The mud system is an important piece of equipment to ensure the smooth progress of reaming and pipe pullback. In the process of drilling and reaming, the mud system can strengthen the soil layer and assist in drilling. The mud system consists of a mud mixing tank, a mud pump, and mud pipelines, which provide mud suitable for drilling conditions to the drilling rig system. Fully stir bentonite, water, and additives in the mud tank, pressurize the mud pump, spray out the drill pipe from the nozzle of the drilling tool, wash the atlas and take away the cuttings, which plays the role of auxiliary drilling.

The intelligent auxiliary system of horizontal directional drilling plays an important role in setting various parameters such as drilling depth, inlet and outlet positions, and pipe bending radius. These parameters can be adjusted according to the actual situation in the actual project.

How Does the Horizontal Directional Drilling Machine Work?

Position the drill pilot hole according to the pre-designed curve. Under the thrust of the drilling rig, the drill bit is driven to rotate and cut the stratum continuously. The drill is equipped with a positioning system. As a result, signals can be transmitted to engineers in real time during the drilling process. Engineers can precisely control the precise coordinates of the drill pipe. If it is found that there is a deviation in the position of the drill pipe, it can be corrected in time so that the pilot hole always advances in the specified direction.

The second step is to pre-expand the pilot hole to a size large enough to safely install the pipe. The reamer is pulled back and rotated while drilling fluid is pumped to cut and remove solids to enlarge the hole. The speed of pre-reaming varies depending on existing soil conditions and the amount of cutting removed from the hole. During the pre-expanding process, bentonite and other additives can form a layer but a high layer on the outside of the hole. This will aid in the stability of the borehole as well as reduce fluid loss or penetration.

The last step is to pull the pipe back into the pre-reamed hole. The drill pipe and reamer are attached to a swivel which is used between the pipe and reamer to prevent any torsional forces from the rotating drill string from being transferred to the pipe. The pre-reamed holes are enlarged at the front, and bentonite and other additives are used to stabilize the soil layer. As the reaming tool advances through the soil, the pipe is laid underground. Just finished the process of the whole drilling and pulling back at last.